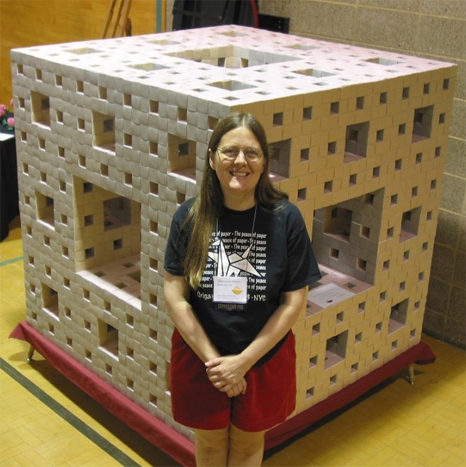 Menger’s Sponge – named for its inventor Karl Menger and sometimes wrongly called Sierpinski’s Sponge â€“ was the first three dimensional fractal that mathematicians became aware of. In 1995 Dr Jeannine Mosely, a software engineer, set out to build a level 3 Menger Sponge from business cards. After 9 years of effort, involving hundreds of folders all over America, the Business Card Menger Sponge was completed. The resulting object is comprised of 66,048 cards folded into 8000 interlinked sub-cubes, with the entire surface paneled to reveal the Level 2 and Level 3 fractal iterations. Recipe for a Menger Sponge: Take a cube, divide it into 27 (3 x 3 x 3) smaller cubes of the same size; now remove the cube in the center of each face plus the cube at the center of the whole. You are left with a structure consisting of the eight small corner cubes plus twelve small edge cubes holding them together. Now, imagine repeating this process on each of these remaining 20 cubes. Repeat again. And again, ad infinitum … To make a Level 3 sponge, stop after 3 iterations.

The Business Card Menger Sponge is being presented in its first appearance to the general public by Machine Project and the Institute For Figuring to coincide with OSME 4, the fourth international conference on Origami in Science, Mathematics and Education, being held at Caltech.

On Sunday Sept 10, Dr Mosely will present a lecture on the logical challenge of decomposing this fractal form into manufacturable subunits and on the structural considerations of building such a large object out of business cards. The audience will be invited to make their own business card cubes and to collaborate in making a Level 1 sponge.

Dr Jeannine Mosely trained as an electrical engineer at MIT and is a leading practitioner of business card origami. In the emerging field of computational origami, a branch of mathematics that explores the formal properties and potentialities of folded paper, her research focuses on the use of curved creases.

This exhibition was assisted by grants from the Andy Warhol Foundation for the Visual Arts and by the Annenberg Foundation. 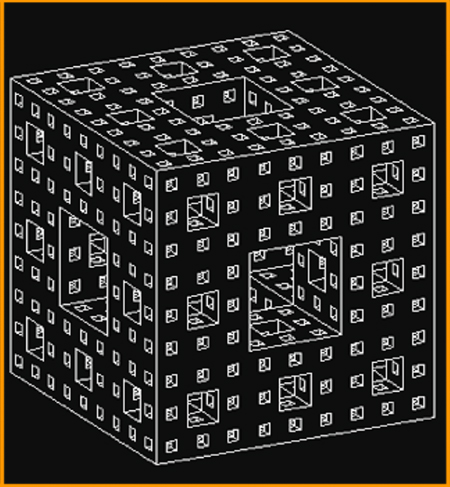