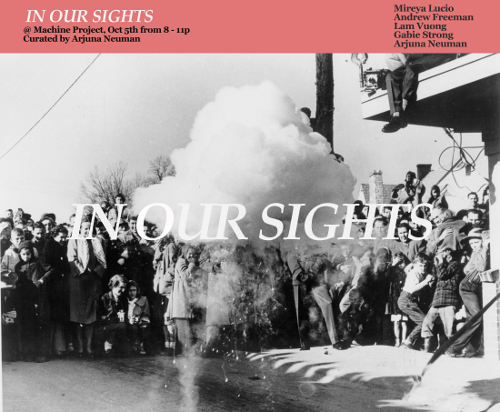 With ongoing conversations and performances by:

In Our Sights is an experiment in pushing the documentary form into a more personal and intimate space. While the document and the archive is still important, as is the research that underpins the re-telling of any story, the delivery of this information will be questionably unmediated. Or, at least, less mediated than in a traditional documentary film.

In Our Sights borrows from the oral tradition, and invites the audience into an installation where artists will perform memories and engage with you in conversations. So that you become as much a part of the re-telling of this story as the story itself.

The future starts in Wendover, Utah. It was here that the bombardiers trained to drop the atomic bombs on Japan. This training facility was also training the world to see and experience differently, it prepared us without us knowing, for a new subjectivity. The immaculate conception of the nuclear bomb, with its Trinity test and press conferences in Japan, ushered in the era of the radioactive sublime. Soon we would all become disciples of technology as an ideology, a theology and the only thing left to believe in.

For In Our Sights Machine Project will be converted into a version of the Wendover bombardier training facility, where bombsights will be cut into the floor to view slide-projected images in the basement below. Inside of this environment Andrew Freeman and Gabie Strong will field conversations and re-tell stories about the contradictions inherent to the armed forces as the last national socialized collective. For example Andy writes:

“In the most simple, persistent conflicted conversation I have with myself I wonder why I can still pick out the sound of a military aircraft and simultaneously think “death from above” and there goes my (a) father.”

Downstairs in the target range Mireya Lucio and Nathan Lam Vuong will each conduct one-on-one performances that weave together personal memories, fragments and stories key to their identity formation inside and against the larger forces of history, ideology and technology.